The Wake Up Mixes, Break Up… Show Curtains

click here to listen to the album, “The Realms… Realm 1: Im’a Rise”

or continue reading to see how we got here.

It was dark. Blue streams of light were suspended in air. Dust particles moved in slow motion through the contrast of light and darkness. One of my home boys and classmate asked me what I was going to do. He and his crew had just came back from the front. They managed to make it though the haze of a thousand stares. Twenty minutes earlier I was part of the crowd that peered at the contestant waiting to see if they were worthy of the stage, at least by our standards.

He asked me again, “Yo B what you gon’ do out there?” From the way I was breathing, there was a hollow in my ears muting the hissing from the fog machine and the bass from the subwoofer that made the floors vibrate. The clouds that the fog machine produced intermingling with the blue lights put me in a slight daze and in the quiet of my mind I thought, “how did I get here?”

The Wake up Mixes
From as far back as I can remember, when I was about seven or eight years old, I woke up everyday humming a new tune of some sort without knowing where it came from. It was just in my head. This early morning humming annoyed the “ish” out of my older brother, who pleaded my mom to make me be quiet… I would go on and on until I was a few years older were I found my self listening to this hip hop show that was broadcasted from Jackson, MS on station 90.1, WMPR. It came on around 9pm almost every Friday night. It was amazing! They played everything some of west coast hip hop, New Orleans bounce music, Southern rap, and East Coast hip hop. 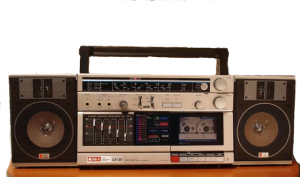 It was the time of cassette tapes and boom-boxes. I recorded every Friday night mix I could and wrote down all the lyrics to my favorite songs. I learned them and replayed the music, rapping and singing as if performing in front of an audience. I first started performing in junior high where I was part of this dance crew that also sang. We danced to and sang Boyz II Men, Cooleyhighharmony joints. That was in 1991. It felt good. But it wasn’t just Hip-hop music that I enjoyed. I got the same good feeling when I listened to music like “Moments in Love” by The Art of Noise. It was something about music in general the could conjure up exciting energies in me.

Break up
It was the end. I’d never care for another like I did her (so I thought at this time with my eight grade mind). The “girl of my dreams” broke up with me during the summer before 9th grade.. I sat at the foot of my bed with my Walkman and played Digital Underground’s Packet Prelude. Rewind, play… Rewind, Play… It calmed my mind but kept me thinking about the situation,like “woe is me.” As strange as it may seem for a while I thought it felt good to be emerged in the melancholiness of the moment while listening to the piano in the song. The next day I was still in the sad mood. I thought to my person, “This is enough!” So I put on one of my favorite artist from back then, “Bum stiggedy bum stiggedy bum, hon!” It was “They want EFX” by Das EFX. And BOOM!, my energy was back up.

I realized that music is powerful and can influence a person to feel/think a certain way or transport them to another space.

Ninth grade happened, tenth grade was here. The talent show was coming. I had already been writing rhymes and poems for a couple of years and by then I had also been using two radios to record myself rapping, singing, or just talking. One radio played the music instrumental and the other radio recorded my voice and the music. One day while riding in friend’s mom’s car as Outkast’s debut album played in the background my friend asked me to be in the talent show with him as a rap duo. I was like, “yeah thats cool!” My friend’s family was from the New Jersey area and one of his older brothers had a Dayton family mix tape or something like that and the tape had an instrumental on it I had never heard and was sure others at my high school had not heard, either. We were to used that instrumental for our rap. I dubbed the tape and practiced my part, daily. A few weeks before the talent show my partner backed out. I was surprised and had one of the those “the show must go on” realizations…

Show Curtains
When the announcer’s booming voice said, ” are y’all ready for the next act?” I completely snapped out of the daze I was in while thinking about how I got here. I wanted to give the people an experience that excited them.. The curtains opened…  It’s because of you, who I make this music for, that I am here on this path!

If you would like to experience the most recent project on this path, click here to listen to the album, “The Realms… Realm 1: Im’a Rise”.

Thank you for sharing this moment and making it worth the while.

116
SHARES
ShareTweet
Bus Battles: How to Survive in Life when it’s Cold Where this Hip-hop came from

Where this Hip-hop came from

Bus Battles: How to Survive in Life when it’s Cold

This site uses Akismet to reduce spam. Learn how your comment data is processed.