Bus Battles: How to Survive in Life when it’s Cold

When peopled talked you could see their breath billowing in the air. Finger drawn names were imprinted in the frost of the windows. There he was, this scrawny little boy sitting in the seat on the opposite side of the bus and immediately to the rear of me. I suppose because he looked “weak” was the reason some of the other guys decided to pick on him, taunt him, and slap his head. Those “seventh grade hitting boys” were quick, able to evade the glancing eyes of the bus driver. I was cool with ’em, at least before this.

The scrawny young man didn’t have anyone to help or take up for him. I understood what he was going through. I too had been pushed around by classmates, in the past. It seemed to be too much for the little guy to bear… A slight heat rose up my spine, my lips folded in, I turned around and told the guys that were terrorizing the little boy to, “Leave that man alone! Y’all going too far!” I walked across the aisle looking the bullies eye to eye. We all stood there for a few seconds. I suppose to not cause a big ruckus the gang of boys decided to stop and turned there attention to something else. 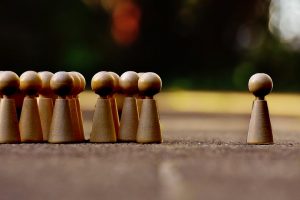 From this situation I realized, regardless of what my peers thought, that there was part of me that wanted to help others, even if they looked different from me. I realized that people need each other to make it in life. I always felt I needed to do what was right and oftentimes such a stance lead me to (seemingly) stand alone. And in most cases I was brave enough to take  that stance.

I say in most cases because there was a point in my growth as an artist, being an adult now, that I wanted to be like other artists because people seemed to like them and there music… Until one day, while writing for a song, I remembered the “bullies on the bus” and thought to my self, “ Am I making music to be like the majority? If so, why? And is it helping anyone or hurting?” I did not want to be like the fellas on the bus, promoting aggression and imposing anger (which is often seen in hip-hop) on the listeners just because everyone else was doing it and onlookers seemed to like it. I needed to write about more than just sex, money, violence and materialism. I needed to do something different with my music. I needed to help support the well being of others.

I sat down with some of my family and people I talk to about my music and shared my concerns… They encouraged me by saying, “ Be different, then!” One of the first songs I recorded after this conversation is entitled “It is Cold”, like it was that day on the bus. The song is about appreciating your worth, having confidence, acknowledging your support, and not regurgitating the “norm”.

The song is not currently available for sale but as a THANK YOU for being one of my subscribers I am giving it to you for free.

You might also consider checking out The Realms.. Realm 1: I’ma Rise. It is my latest album and it’s packed full of fearless lyrics, unpredictable hooks, and intriguing beats.

142
SHARES
ShareTweet
The Wake Up Mixes, Break Up… Show Curtains

Where this Hip-hop came from

The Wake Up Mixes, Break Up… Show Curtains

This site uses Akismet to reduce spam. Learn how your comment data is processed.